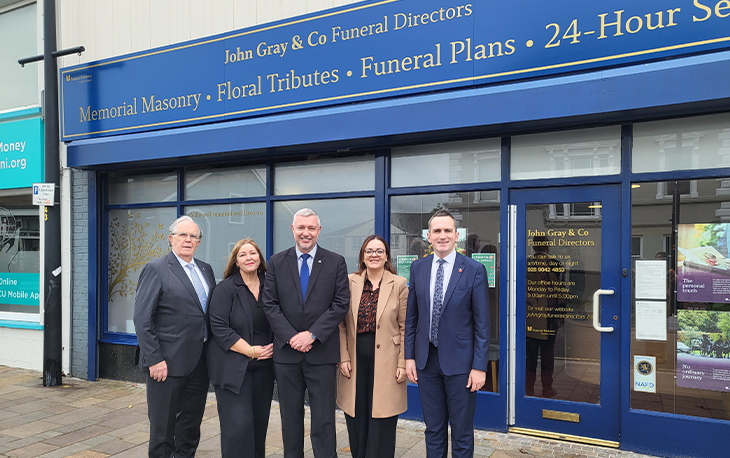 A long-established funeral firm have extended their funeral home into a previously empty shop next door to offer grieving families a more comfortable and private experience.

John Gray & Co, based in Holywood High Street, County Down, have taken over the building next door – which had been a chemist – and marked the official reopening with a celebration attended by Stephen Dunne MLA.

The move will allow their dedicated team to take on more funerals and allow visitors extra space when they come into the home to arrange a service or visit a loved one.

The extension has been in the offing for two years, with work to revamp the ex-pharmacy happening behind the scenes after the conversion was approved by the local council.

In order to match the overhaul in the new part of the building, their original premises has also been refurbished to match.

John Gray & Co was first established more than six decades ago in 1960 and is now part of the Funeral Partners network.

Senior Funeral Arranger Barbara Wilson said the launch event was a great success and it was wonderful to see so many local community organisations represented.

She said: “The expansion has been a major talking point in the town, and it has been very well received.

“Our launch event was well attended and was very successful so a big thank you to everyone who attended.

“We now have more space, with increased privacy for families, and we will continue to offer the same high quality standard of care.”

Julian Hodgkinson, Regional Development Manager for Northern Ireland, said the increased privacy was the key reason for the expansion.

He said: “This is something which has been in the pipeline for a long time, and it is great to see it come to fruition.

“The feedback has been very positive, so far, especially the added privacy for families.

“Families now have the opportunity to spend more time with their loved ones in a welcoming and comforting environment.

“We now have four rest rooms, a private arrangement room rather than one which was open plan and a private space for families to gather outside the rest rooms.

“There is also the opportunity to facilitate more funerals in the future.”

For more information about John Gray & Co, or to enquire about funeral arrangements at the Holywood branch, visit https://www.johngrayfuneraldirectors.com/.